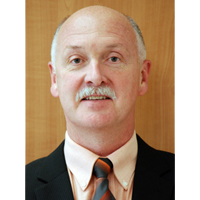 When you think of Tom Barrick, you think of passion, intensity and leadership. During Barrick’s 27 year career as a head coach, people saw a lot of each. Each of these characteristics can be traced back to his roots in Coshocton, OH. Tom is the son of a factory worker and a full-time mother. Both Sandy (Stipes) and the late Ron Barrick instilled in him a work ethic and the values that later formed the foundation of his coaching philosophy. Tom and his wife of 29 years Kim (Benedict) were able to pass those same core values on to their own children. Tom and Kim have two adult daughters, Kayla (Barrick) Dawson (26) of Richmond, KY, who is an elementary school teacher, and Logan Barrick (23) of Falls Church, VA, who is a registered nurse.

Coach Barrick began his coaching career in 1985 as an assistant to Dan Liedtke at Fort Frye High School. After one year as an assistant, Coach Barrick accepted the head coaching job at Jewett-Scio H.S. (now part of Harrison Central). After two frustrating seasons, his persistence paid off when his Jewett-Scio teams were able to get back to competitiveness and help launch his hall of fame career.

In the fall of 1990, Tom accepted the head coaching job at Morgan High School. At Morgan he was hired to restore the basketball program to respectability after the Raiders had suffered a five year drought going 19-86 the 5 years prior to his arrival. During his four year tenure in McConnelsville, the Raiders improved from a last place team in the Muskingum Valley League to a second place finish in 1994 with a 16-6 record.

In the summer of 1994, Tom was named the head basketball coach at Wheelersburg High School where he stayed for the next 19 seasons. During his tenure at Wheelersburg, Coach Barrick posted a 339-113 record with 14 sectional championships, 8 district titles and three trips to the Final Four. His first Wheelersburg team (’94-’95) advanced to the state finals only to lose to Orrville H.S. and OHSBCA Hall of Fame coach, Steve Smith. In 2006 and 2007, Coach Barrick’s teams returned to the Final Four but were defeated in the state semi-finals by Cleveland St. Joe’s (2006) and Cincinnati North College Hill (2007). He retired after the ’12-’13 season as the winningest basketball coach in Wheelersburg H.S. history.

Tom has been very fortunate during his coaching career. He was named OHSBCA Coach of the Year in 2006. He had the honor of coaching the South squad in the 2001 Ohio North/South All-Star Game. In 1998, he was an assistant coach with OHSBCA Hall of Fame coach, Doc Daughtery in the Ohio/Kentucky All-Star Game. Among his other coaching honors, Coach Barrick was named Southeastern District Coach of the Year in 2001 and 2007.

Tom has also had the good fortune to serve in many leadership roles within the coaching profession. He served not only on the local level but also on the state and national level. Tom served as District 14 Director from 1999-2006. Then in 2006 he was elected as an executive officer which culminated with his serving as OHSBCA President from 2010-13. During this tenure as an executive officer, he also served as the chairman of the Academic All-Ohio committee which recognizes both players and teams for their excellence in the classroom. He still serves in that capacity today. Last summer Tom was selected to serve on the executive board of the National High School Basketball Coaches Association. Tom is the first Ohio coach to serve in this role. Coach Barrick also serves on the Board of Directors with the Ohio Basketball Hall of Fame.

Tom received his Bachelor’s degree from Rio Grande College in 1985 and his Master’s degree from Ohio University in 2001. He continues to teach within the Wheelersburg School District.