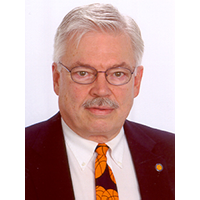 Coach Rettig graduated from Lima Senior High School in 1963 and Bowling Green State University in 1967. Tom's dream of being a coach began first, as an assistant coach in Lucas, Ohio, then going Bethel Tip City for a year, followed by two years at Dayton Fairview where he was assistant football coach, assistant basketball and varsity boy's tennis coach. His first head coaching job was at Holland Springfield where he was the boy's coach for five years. He then went to Oregon Cardinal Stritch High School where he was the boy's coach for three years. Tom then took over ass girl's coach at Tipp City where he was a highly successful coach for 23 years. From there he went to Greenville High School where he finished his career as a coach. The Tipp City Red Devils had eight CRC and CBC league titles and were runners-up six times in these two leagues. The Red Devils won 11 sectional titles. They were district Champs in 1986 and 1987 and were runners-up six years ('85, '89, '90, '92, '95 and '05). They were regional Champs in 1986 and 1987. In 1986, they were in the State Finals against Akron losing in overtime. In 1987, they were in the State Final Fours. In 1988, they had an undefeated regular season, 20 - 0. Tom has achieved many awards during his career, namely:  1998 OHSAA Sportsmanship, Ethics and Integrity Award, League Coach of the Year eight times, Associated Press Coach of the Year in 1991, Bob Arnzen Award Winner in 1999, OHSBCA Girl's Coach of the Year in 2000 and Southwest District Coach of the Year twice, Paul Walker Award Winner in 2005, National Federation Ohio Coach of the Year for Girl's Basketball in 2007. Tom and his wife Anne, have two daughters, Michelle, husband Jeff Gephart and their children Zachary and Kaitlin; Nicole, husband Tim Rager and their children Alexander and Madelin. Coach Rettig has served the OHSBCA in several capacities: 21 years as District 9 Director and 21 years on the State Board; North-South All-Star game coach in 1988; Ohio-Michigan All-Star game coach in 1991; and Ohio-West Virginia All-Star game coach in 2000. In addition to basketball, he was a head baseball coach (4 years), head tennis coach (5 years - 2 boys and 3 girls). Tom is currently Director of the Girls' North-South Games for the OHSBCA. Tom's mission has always been to teach the game of basketball, to promote an understanding of the game and to prepare his players to win game in tight situations. He did his best to utilize his players to their given potential, emphasizing their best qualities. He also saw his role to teach "life lessons". Tom tried to present a positive role in the community with his interactions with the youth and his comments to the press. He enjoys young people and continues to teach.