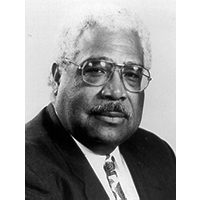 Since the inception of the OHSBCA Hall of Fame in 1987, we have inducted eight as honorary members. Wayne is the ninth person to be awarded this honor. All of these Hall of Famers have contributed so much to basketball, either as coaches, players, administrators or as promoters of the game. Wayne has had an exemplary impact on basketball at all levels, not only in Ohio but nationwide. He has had to jump through many hoops (excuse the pun) to attain his goals on his journey to a successful career. He has reached the top in basketball. He was born in Springfield, Ohio in March of 1936. He attended Tecumseh High School and was a three-year letter winner where he played for Frank Shannon. Coach Shannon is also an Honorary Hall of Famer. When he started high school at Tecumseh, he was the only African-American student in the school and that created some interesting moments which he handled with dignity and class, thanks to his grandfather. At Miami University, Wayne was a two-time All-Mid-American Conference selection. In 1957-58 he was All-American Honorable Mention, team captain, high scorer and MVP. He was the fourth player to Miami University history to have his jersey retired. Mr. Embry played in the NBA for 12 years. - eight years with the Cincinnati Royals, two with the Boston Celtics and in 1968-69 with the Milwaukee Bucks. His accomplishments include: Five-time consecutive NBA All-Star (1961-65); NBA Championship with the Boston Celtics (1968); Captain of the Cincinnati Royals (1962-66); First African-American NBA General Manager with the Milwaukee Bucks (1971-79); Vice-President and General Manager of the Cleveland Cavaliers (1985-92); Executive Vice-President of the Cleveland Cavaliers (1992-99); First African-American NBA President and Chief Operating Officer of the Cleveland Cavaliers (1994-02); The Sporting News NBA Executive of the Year in 1992 and 1998. Under his tenure with the Cavaliers, he oversaw an attendance increase from 9,533 to 16,942 per game in Cleveland. Wayne was inducted into the Cleveland Sports Hall of Fame in 1998 and the Tecumseh High School Hall of Fame in 1999. He has a road named for him in Clark County. When asked reasons for his success, Wayne said is started with his family - his mother, his father, and particularly his grandfather. They provided a foundation for him based on faith and values. They instilled character in him and provided him with an understanding of how and a desire to succeed. He gave credit to his wife Terri, and his children who allowed him to pursue the career that he chose. Then he credited people beyond his family who cared about him, namely teachers, particularly his coaches who taught him disciplines to improve intellectually and athletically and wouldn't allow him to fail. He succeeded by practicing these words that all begin with the letter P - preparation, perception, perseverance, persistence, pride and passion. Wayne is the husband of Terri and father of Debbie, Jill and Wayne, Jr.