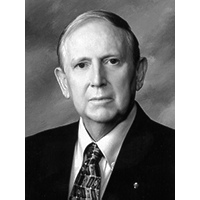 WILL COLLINS OF BELLEFONTAINE

Coach Collins began his illustrious coaching career while a student at the University at Toledo. He was hired as a JV coach at Troy-Luckey (now Eastwood) under the legendary coach Doyce "Frenchy" Foliere. Will’s JV record was 25-5. In 1959 he was hired as head basketball and JV coach at Lykens High School (now Wynford). His team’s varsity record was 23-2. Following that season he took the JV coaching position at Toledo Rogers where they complied a 24-3 record for 2 years. In 1962 he became the head coach at Rogers where they won 109 games. He was named head coach at the Bellefontaine in 1971 and remained there for 28 years where they won 416 games. While at Lykens and Rogers he was also head baseball coach with winning records.

Will’s overall varsity record was 548-263 which included 12 league Championships (Crawford County League-1, Great Lakes League-3, Central Buckeye Conference-8), 18 sectional Championships, 7 District Championships plus runner-up 6 times, 1 Regional Champion (Bellefontaine) and State Final Four (Bellefontaine) in 1973. Three of his teams were undefeated during the regular season, Lykens, 1959-60, Bellefontaine, 1975-76 and 1991-92. The 1975-76 team was ranked 4th in the AAA Division of the state. In 1991-92 they were ranked 1st in Division II.

Coach Collins was known for his enthusiastic and professional approach to his career in coaching and working with players. He believes a successful coach must control: organization, planning, preparation, focus, and necessary adjustments in addition to a basic philosophy of ridged expectations, but flexible as to a style of play.

Will graduated from Webster High School (Wood County) and the University of Toledo. He has been married to his wife, Karen, for 39 years. They have 3 sons, Rod( computer specialist), Jeff (Division Director of the D.E.C.A. Organization) and Jamey (Teacher and Head Basketball Coach at Ridgedale High School, Marion County. He also has a grandson, Justin, son of Jeff.

Coach Collins is a long time member of the OHSBCA. Even in retirement, Will has continued his love for the game by being a voluntary Assistant Varsity Coach to his son, Jamey at Ridgedale.