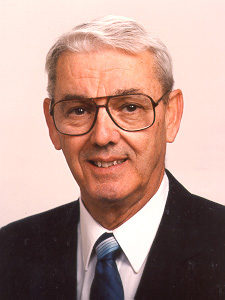 The Ohio High School Basketball Coaches Association is proud to announce that Bob Arnzen of Delphos S. John’s High School is the recipient of the 1979 Paul Walker Award. The Paul Walker Award is presented annually by the OHSBCA to an active coaching member of the association who has made significant contributions to high school basketball. The award is named in honor of the late Paul Walker, the long time coach of Middletown High School. At the time of his retirement, he had the most wins as a boys basketball coach in Ohio High School Basketball history.

Throughout his career Bob was very active in the coach’s association, not only on the local level but also the state and national levels. He organized the District 8 Coaches Association in 1966, serving as President through 1968. He served as District Director of the OHSBCA from 1966-68 and then was elected Assistant Secretary / Treasurer of the state association, from 1970 to the present. He also served on the Basketball Rules Advisory Committee from 1987-1994. For many years he has also been a member of the National Federal Interscholastic Coaches Association.

Coach Arnzen received many honors during his career, including: Coach of the Year in Ohio twice; National Catholic Coach of the Year; Paul Walker Award; Ohio Pro / Am Award for Distinguished Lifetime Achievement in Sports; Mac Morrison Lifetime Service Award from the Northwest Athletic District Board; University of Dayton Sports Achievement Award; and Northern Kentucky Sports Hall of Fame.

Bob graduated from the University of Dayton in 1951 with a Bachelor’s of Science in Education, and received his Master’s in Administration there in 1979. He is a devoted family man with wife Alice, sons Jim Arnzen and Ted Arnzen, and daughters Elaine Sheehan, Marie Arnzen and Jeanne Gulick. He has eight grandchildren.