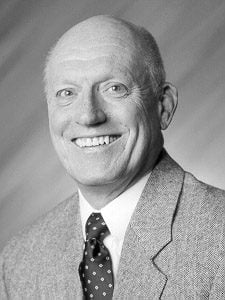 The Ohio High School Basketball Coaches Association is proud to announce that Bob Shoemaker of Watkins Memorial High School is the recipient of the 2001 Paul Walker Award. The Paul Walker Award is presented annually by the OHSBCA to an active coaching member of the association who has made significant contributions to high school basketball. The award is named in honor of the late Paul Walker, the long time coach of Middletown High School. At the time of his retirement, he had the most wins as a boys basketball coach in Ohio High School Basketball history.

Shoemaker’s first teaching and coaching assignment was a Danville High School in 1962 where he taught math, physical education, and health.  He was an assistant varsity football coach, Junior High basketball coach, and Head Track Coach.  The next year he was name as the Head Basketball Coach.  In his 39 years as a coach, he also has worked with football, cross country, golf, track, baseball, and girls softball at the following school systems:  Trenton, Claymont, Ridgewood, Big Walnut, Heath, Granville, Lakewood, and Watkins Memorial.  Shoemaker has been a Varsity Basketball Coach for 33 years, winning 351 games.  Included in his record are 6 League Championships, 13 Sectional Championships, 2 District Championships, and 1 Regional Runner-up.  In addition, he has had two teams that were undefeated in the regular season.  Coach “Shoe” has won numerous Coach of the Year awards, coached in the North-South All-Star Game in 1993, and was elected in the Licking County League Coaches Hall of Fame.

In 1967 Coach Shoemaker received his Masters Degree from Wittenberg University.  As a teacher, he has served as a junior class advisor, and in 1987 received the Dow Chemical Excellence in Teaching Award.  Coach Shoemaker has been involved with the OHSBCA from 1965 to the present.  He has been a director of District 11 since 1988, and is a member of the Sportsmanship, Ethics, and Integrity Committee of the Ohio High School Athletic Association.  He has been actively involved in his church’s activities and has aided with programs at the Newark YMCA.

Coach Shoemaker is now a retired teacher but is currently coaching at Watkins Memorial High School.  He and his wife Jane have two children, Roberta Jo, an office manager in Chicago, Illinois, and Chuck, a caterer in Minneapolis, Minnesota.