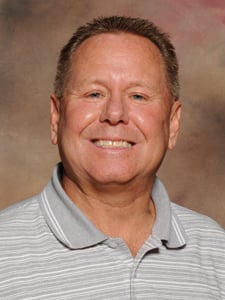 The Ohio High School Basketball Coaches Association is proud to announce that Dave Butcher of Pickerington North High School is the recipient of the 2013 Paul Walker Award. The Paul Walker Award is presented annually by the OHSBCA to an active coaching member of the association who has made significant contributions to high school basketball. The award is named in honor of the late Paul Walker, the long time coach of Middletown High School. At the time of his retirement, he had the most wins as a boys basketball coach in Ohio High School Basketball history.

During this time, he has compiled a record of 671-81, which is almost a 90% winning percentage. He has won 24 district titles (23 in a row), 23 Ohio Capital Conference Championships, 12 regional championships, 6 state titles and finished #1 in the country by USA Today in 1999. Dave has received numerous coaching honors such as: OCC Coach of the year, District Coach of the Year, State Coach of the Year and was also named USA Today’s National Coach of the Year. In addition, Dave has coached in the WBCA College All-American Game, has been a member of the National High School All-American Selection Committee, and had the honor of being a part of USA Womens Basketball, coaching at the Youth Developmental Festival in Colorado Springs.

Butchers’s teams were ranked for 10 straight years in USA Today’s Super 25 and were ranked number one by the Associated Press for nine consecutive years. Pickerington also had a 74 game winning streak and won 181 straight league games during his career. Five of his players were named Player of the Year in Ohio and more than 70 of his student athletes have played Division 1 college basketball. Dave was inducted into the Ohio Basketball Hall of Fame in 2008.

Dave has been married for 33 years to Linda and they are the proud parents of two sons and a daughter. Brian is a graduate of Capital Law School and is employed as an attorney in Columbus, Jeff is currently finishing his PHD in English at Arizona State and Stacey, a Capital nursing graduate, is a labor and delivery nurse in Traverse City, Michigan.