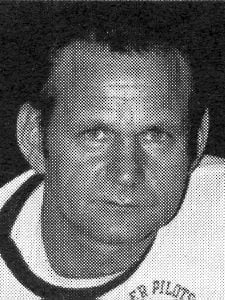 The Ohio High School Basketball Coaches Association is proud to announce that Richard “Dick” Potts of Hannibal River High School is the recipient of the 1981 Paul Walker Award. The Paul Walker Award is presented annually by the OHSBCA to an active coaching member of the association who has made significant contributions to high school basketball. The award is named in honor of the late Paul Walker, the long time coach of Middletown High School. At the time of his retirement, he had the most wins as a boys basketball coach in Ohio High School Basketball history.

In 1958, he became the coach at Skyvue, where he was again a one-man coaching staff. While there his varsity basketball teams were 52-34, and he enjoyed success as the track coach as well. In 1962 he took over as coach at River High School where he spent 29 years, with a record of 399-218.

While at River High School, Potts also served as head baseball coach and assistant football coach from 1962 to 1968. Always a friendly guy, Potts never met a stranger and is a first class storyteller. As a coach, he was well-liked by his players, significantly tailoring his team’s style of play to the type of material he had. He drove the school bus, and was the school principal. Each night of the week while at Skyvue, Dick went to a different grade to coach. He literally did it all.

Dick belongs to the Stafford Lodge of the Masons. He and his wife Ruth, who passed away in February of 1993, had one daughter, Linda.