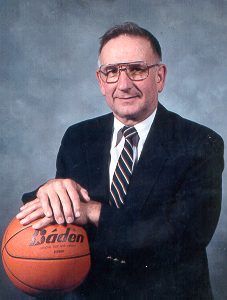 The Ohio High School Basketball Coaches Association is proud to announce that Harold “Doc” Daugherty of Euclid High School is the recipient of the 1990 Paul Walker Award. The Paul Walker Award is presented annually by the OHSBCA to an active coaching member of the association who has made significant contributions to high school basketball. The award is named in honor of the late Paul Walker, the long time coach of Middletown High School. At the time of his retirement, he had the most wins as a boys basketball coach in Ohio High School Basketball history.

Coach Daugherty has been a member of the OHSBCA for 33 years serving as a representative, going through the officer’s chairs, and serving as president from 1984-86. He was named Division I Coach of the Year in 1990. He served as a coach in the following All-Star Games: Ohio-Michigan, Ohio-Kentucky, and Ohio North-South along with many other All-Star games in the Cleveland area.

Doc initiated and co-directed the Ohio-Michigan All-Star game for boys and girls (1986-present).

At Euclid, Coach Daugherty promoted a popular saying, “It’s a beautiful day in Euclid! He wanted his students and players to enjoy and appreciated their lives, but at game time he expected 100% effort and hard work. He also serves as assistant football coach for 8 years. In 1949 Doc graduated from Glenford High School in a class of 16 students and graduated from Ohio University. In 1954, Doc served in the US Army in Korea as a 1st Lt. in the Medical Corps. After his military service Doc received a Master’s Degree from John Carroll University. He served the American Red Cross as a volunteer teaching CPR for 42 years.