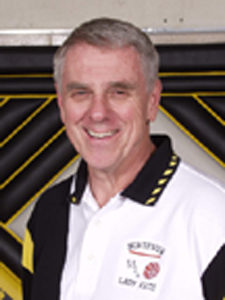 The Ohio High School Basketball Coaches Association is proud to announce that Jerry Sigler of Sylvania Northview High School is the recipient of the 2007 Paul Walker Award. The Paul Walker award is presented annually by the OHSBCA to an active coaching member of the association who has made significant contributions to high school basketball. The award is named in honor of the late Paul Walker, the longtime coach of Middletown High School. At the time of his retirement, he had the most wins as boy’s basketball coach in Ohio High School Basketball history with 695.

Sigler graduated from Eastwood High School and Bowling Green State University where he received a Bachelor of Science Degree in Physical Education and a Master Degree in Education and Administration. He retired from Sylvania City Schools where he taught elementary physical education for thirty-one years. Sigler continues there as the Head Girls Basketball Coach. During his tenure with Sylvania, he was an assistant football coach for three years and the varsity softball coach for fourteen years where his teams won six league titles, three district championships, and a trip to the final four in 1992. Sigler was named league coach of the year five times.

In thirty years as Sylvania Northview Girls Varsity Basketball Coach, Sigler has amassed an overall record of 556 – 138. His teams have had three undefeated regular seasons, nine Great Lake League (GLL) championships, six Northern Lake League (NLL) championships, seven district championships, one regional runner-up, and three trips to the state final four. Four of his teams have been ranked in the top ten of Ohio. He was named the Associated Press Ohio Coach of the Year in 1978 and 2004, the OHSBCA Division I Coach of the Year in 1998 and 2004, has recieved the Bob Arnzen Longevity Award, and was the 2005 recipient of the OHSAA Sportsmanship, Ethics and Integrity Award. Sigler has been an OHSBCA North-South Coach, Ohio-Indiana Coach, Ohio-West Virginia Coach, and a District 7 Coach All-Star Coach six times. He was named the District 7 Coach of the Year seven times, GLL Coach of the Year ten times and the NLL Coach of the Year seven times.

Sigler has been very active in the OHSBCA. He was instrumental in organizing the girls coaches division of District 7 in the 1970s; served as President of District 7 Coaches Association for four years (1998-2002); and founded a Hall of Fame for District 7 in 2003. He is currently serving on the OHSBCA Girls Advisory Board.

Jerry and his wife Karen are the proud parents of two children. Their son Jerry, Jr. is a real-estate broker in Seminole, FL, where he lives with his four children: Allison, JP, Morgan and Brandon. Their daughter Gretchen, married to Aaron Bobroff, lives in Chicago where she is an account executive for Getty Images and he is with Sicor Pharmaceutical Sales.