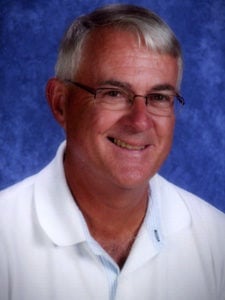 The Ohio High School Basketball Coaches Association is proud to announce that Jim Osborne of Gallia Academy High School is the recipient of the 2009 Paul Walker Award. The Paul Walker award is presented annually by the OHSBCA to an active coaching member of the association who has made significant contributions to high school basketball. The award is named in honor of the late Paul Walker, the longtime coach of Middletown High School. At the time of his retirement, he had the most wins as boy’s basketball coach in Ohio High School Basketball history with 695.

Osborne, who came to Gallipolis as a graduate of Wittenberg University in1969-70, he began his 40th season as head basketball coach at Gallia Academy this winter. His Blue Devil teams have won 517 games, lost 330 (60.2 percentage at a football school) won 11 SEOAL titles with a 307-175 mark (63.6 percentage) and finished second in league play nine times.

Osborne’s Blue Devil cagers have finished in the SEOAL’s second division six times during the past 39 years. Under Osborne, GAHS has won 14 sectionals, two district tournament crowns, and appeared in the regionals twice. The Blue Devils have been district runner-up four times and a district semifinalist 21 times. He has been named SEOAL and district basketball coach of the year 12 times.

Besides coaching basketball, Osborne has spent 23 years as a tennis coach (with three SEOAL crowns) with over 200 wins, 11 years as a baseball coach, recording more than 100 wins with a district runner-up effort in 1971, and coached a Blue Devil golf team in the state golf tournament in the early 2000’s. He was an assistant coach of the track and field team when GAHS won the 1970 SEOAL title.

During his 42 years of teaching with 40 years teaching at GAHS, Osborne has taught physical education, health, general science and driver’s education. Known around southern Ohio as “Coach Oz” or “The Wizard” Osborne has coached in the Ohio North-South All Star game, Ohio-Kentucky and Ohio-West Virginia All-Star game. Osborne has been a sought-after speaker on both basketball and his philosophy of life.

It will be Osborne’s second state award. In 2003, he was recipient of the OHSAA’s Sportsmanship, Ethics and Integrity (SEI) Award. He has received coaching longevity awards in both basketball and tennis. Osborne has served as president of the District 13 Basketball Coaches Association since 1988, which started with 13 members and now has more than 300 in a district that has the smallest number of schools in the state. Osborne is also a charter member of the GAHS Athletic Hall of Fame committee. Both committees are active in generating scholarship money for worthy student athletes.

Osborne and his wife Jennifer reside in Gallipolis, Ohio. They have two grown children, Tige Osborne and Tia (Jason) Vasquez and two grandchildren, Caden and Keely.