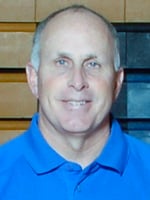 Coach Reynolds has been selected as the Cincinnati Hills League Coach of the Year 7 times, District 16 Coach of the Year 9 times and the OHSBCA State Coach of the Year in 1999. Jim is also a recipient of Sportsmanship, Ethics and Integrity Award, a North/South All Star Game Coach and received the Bob Arnzen Longevity Award. He has served District 16 for over twenty years holding the District 16 director position, secretary/treasurer position and currently is the communications director.