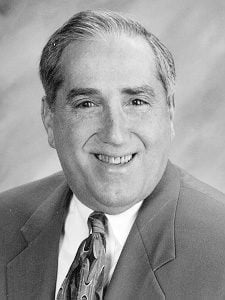 The Ohio High School Basketball Coaches Association is proud to announce that Joe Petrocelli of Archbishop Alter High School is the recipient of the 1995 Paul Walker Award. The Paul Walker Award is presented annually by the OHSBCA to an active coaching member of the association who has made significant contributions to high school basketball. The award is named in honor of the late Paul Walker, the long time coach of Middletown High School. At the time of his retirement, he had the most wins as a boys basketball coach in Ohio High School Basketball history.

Joe has coached many outstanding players at Alter throughout his career.  45 Alter players have received full scholarships.  Two of his former players have played in the NBA – Jim Paxson – Portland Trailblazers and John Paxson – Chicago Bulls.