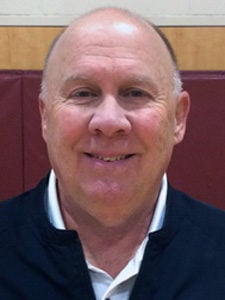 John is a 1968 graduate of Northwest High School in Canal Fulton, Ohio. He then got his undergraduate degree from Kent State University and his Masters from Youngstown State University. He began his coaching career as an assistant coach in Brookfield Ohio where they won 4 district championships in his 5 years. He then started his head coaching career at Kinsman Badger for 1 year. He then returned to Brookfield for 3 years as head coach.

The next stop on his coaching career was at Canfield High School where he was the head coach for 28 years. In 2010, John left high school coaching to be on the Youngstown State University Women’s staff for 3 seasons. His last stop in coaching has been South Range High school where he is starting his 4th season.

John’s record at present is 508-265. He is starting his 36th year as a head coach. His teams have won 13 league championships, 20 sectional championships and 5 district championships. He has also coached the North-South All-Star Game in 1993. While at Canfield he was honored to receive the Bob Arnzen award for longevity that is given for coaching for 20 seasons at the same school.

John has received a coach of the year award in Trumbull and Mahoning County a total of 20 times in his career. He is also very proud to have 47 or his players and coaches who have moved on to receive head coaching positions. He has also been a Director in the Mahoning Valley Coaches Association for 24 years. He has also been a director for District 1 in the OHSBCA for the past 4 years. He was recently entered into the Canfield High School Hall of Fame. John presently lives in Boardman, Ohio with his lovely wife, Roseann, for the past 16 years.