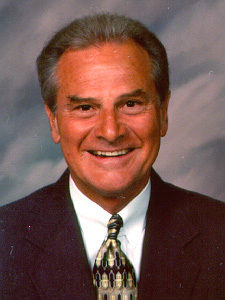 The Ohio High School Basketball Coaches Association is proud to announce that John “Butch” Ross of Middletown Fenwick High School is the recipient of the 1989 Paul Walker Award. The Paul Walker Award is presented annually by the OHSBCA to an active coaching member of the association who has made significant contributions to high school basketball. The award is named in honor of the late Paul Walker, the long time coach of Middletown High School. At the time of his retirement, he had the most wins as a boys basketball coach in Ohio High School Basketball history.

When Fenwick’s John “Butch” Rossi was president of the Ohio High School Basketball Coaches Association, he recommended that the group institute a Paul Walker Award to be given to the coach who best exemplifies the principles of high school athletics. Rossi made the recommendation after Walker had retired as Middletown High School coach with a career record of 695 victories.

Walker, who retired after his Middies lost in the finals of the 1976 tournament, was on hand Saturday to make the presentation. Walker has managed to be present for all the presentations, whether at the St. John Arena or the UD Arena, where the state crowns were decided on two occasions.

Rossi, now principal at Fenwick, retired at the close of the 1988-89 season with 402 victories in 31 seasons. Saturday morning, between halves of the Division II championship game at the St. John Arena in Columbus, Rossi was presented the same Paul Walker Award. Included in Coach Rossi’s 402 wins are seven district championships, three regional runner-ups, on regional championship and the Class A State Championship in 1982. Coach Rossi was also recognized as the Ohio Class A Coach of the Year in 1985.

He resides with his wife, Mary Ann and their 10 children.