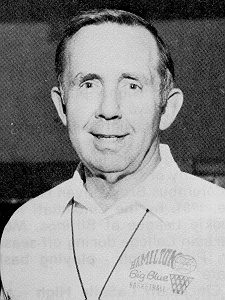 The Ohio High School Basketball Coaches Association is proud to announce that Marvin McCollum of Hamilton Xavier High School is the recipient of the 1982 Paul Walker Award. The Paul Walker Award is presented annually by the OHSBCA to an active coaching member of the association who has made significant contributions to high school basketball. The award is named in honor of the late Paul Walker, the long time coach of Middletown High School. At the time of his retirement, he had the most wins as a boys basketball coach in Ohio High School Basketball history.

Marvin McCollum is a graduate of Fairfield High School in Butler County Ohio. He attended Wake Forest College in 1941 on an athletic scholarship. He received his Bachelor of Science Degree from Miami University in 1948, earning his Master’s Degree from Miami in 1952. Marvin served a four year term with the United States Marine Corps during World War II.

McCollum’s high school coaching career began in 1948 at Seven Mile, Ohio, where his teams won 123 and lost only 25 games in six years. He came to Hamilton High School and coached the reserved basketball team for three years before stepping up to head coach of the “old” Big Blue in 1958-59. He has successfully coached baseball, football and track teams. McCollum, who had a 17-4 record as the last Big Blue basketball coach, resumed his coaching career at Hamilton Taft.

The high spot in Marv’s coaching career was in 1962 when he guided Hamilton Taft to the Class AA State Title with a 27 – 0 mark. He is a member of the Ohio High School Basketball Coaches Association, having served as its president. During his term in office changes occurred in the basketball rules due to the fine efforts of the Basketball Coaches Association at that time – boys were permitted to attend summer camps, play independent basketball and participate in open gym activities during summer vacations for the first time in Ohio. His respect for the coaches association and its contribution to basketball in the State of Ohio is held in highest esteem.

His career record is impressive at 485 wins and 145 losses for a winning percentage of 77. Marv McCollum’s coaching record, style and philosophy are exemplary for his school, community and state. Coach McCollum has been the recipient of numerous awards and accolades over the years, ranging from Ohio Coach of the Year in 1962 to Greater Miami Conference Coach of the Year in 1981. Equally notable in his career is the fact that his teams have never had a losing season in 29 years.