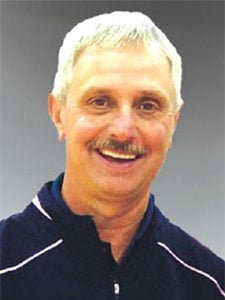 Norm began his high school coaching career at Gallia Academy where he coached football and junior varsity basketball. He than became head boys varsity coach at Oak Hill High School for six years and Wilmington High School for two years before becoming Athletic Director and Boys Varsity Coach at Chesapeake High School in which he has served for the past 17 years.

In twenty-five years of coaching varsity basketball his overall record is 425-127 and at Chesapeake his record is 301-63. Norm has guided Chesapeake to the regional tournament 6 times. In 1992 and 1993 Chesapeake had back to back undefeated regular seasons in which they won 48 straight regular season games. In his 17 year tenure at Chesapeake, they have won the Ohio Valley Conference 12 times and been ranked in the states top ten media poll 11 times. Coach Persin has been elected OHSBCA Division II Coach of the Year in 1989, 1992 and 1997. He has been selected Southeastern Ohio Coach of the Year 5 times and District 13 Coach of the Year on 9 different occasions.

Norm has served as District 13 Director for the past 13 years. He has coached in the North-South All-Star Classic, Wendy’s Classic, Ohio-Kentucky All-Star Game, and Ohio-West Virginia games by choosing players and coaches as well as serving as site manager. This past fall Norm was inducted into the Ohio Interscholastic Athletic Administrators Association Hall of Fame.

Norm is the son of Jack and Elizabeth Persin (both deceased). He is married to Rita Garland Persin. They have one daughter, Haley, teaching in the Norwalk City School System and a son Jim Don.