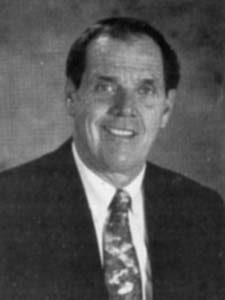 The Ohio High School Basketball Coaches Association is proud to announce that Ray Etzler of Convoy Crestview High School is the recipient of the 1994 Paul Walker Award. The Paul Walker Award is presented annually by the OHSBCA to an active coaching member of the association who has made significant contributions to high school basketball. The award is named in honor of the late Paul Walker, the long time coach of Middletown High School. At the time of his retirement, he had the most wins as a boys basketball coach in Ohio High School Basketball history.

Ray Etzler of Crestview High School in Conroy, a 31-year veteran of Ohio High School Basketball Coaching, was honored as the 1994 recipient of the Paul Walker Award.

Coach Etzler has completed his 28th season as head basketball coach at Convoy Crestview High School. He graduated from Convoy Union High School in 1959 and Defiance College in 1963. In 1966, he earned his Master’s from St. Francis College in Fort Wayne, Indiana. He served at Crestview from 1964 until 1994, with the exception of two seasons (1973 and 1974) where he was an assistant coach at Defiance College. His record includes ten Northwest Conference Championships, 15 Sectional, three District, and one regional title, advancing to the State Tournament in 1971.