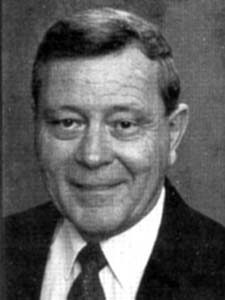 1963 seems a long time ago to most of today’s coaches, and Rich and Maureen Voiers never considered during the hectic 60’s that they would be nervously awaiting half-time of the State Tournament Division I Finals like they were on Saturday, March 27, 1993. Here it was 30 years after Rich began as Head Varsity Basketball Coach, that he was nervous about what to do at perhaps his final appearance on the hardwood. Memories of past experiences during those 30 years at Bay High School, would flash by, if only subconsciously, and bring warm satisfaction in a job, not only well done, but recognized by their peers. OHSBCA Past President Gary Walters recognizes “Rich Voiers as the Paul Walker Award Winner for outstanding service during his basketball coaching career.” This award is not given to a coach for one victory, or for one season of victories. This isn’t something that goes to a coach for having a few good players that gave their school a strong four-year run. This is for timeless hours of bus trips, banquets, practices, meetings, summer camps, individual conferences, back yard drill sessions, telephone contacts, all-star ballots, all-star games, parent letters, late night meals, early morning conditioning, last day cuts, scrimmages, regular season and tournament games, the heartbreaking losses, and the championships won. The players whose lives were touched and directed. The letters and kind words they said, etc. for three decades. This is an award worth winning, and on richly deserved.

Rich Voiers just completed his 30th season as a head varsity boys basketball coach, all at Bay High School in Bay Village (Cuyahoga County). He has a 446-176 record (.717 percentage) including a 17-6 record this season. The 1992-93 team was eliminated from the tournament trail 48-40 by St. Marys Memorial in the regional semifinals. He entered the current season 10th on the list of active boys basketball coaches in Ohio. He served as junior varsity coach at the school for six years prior to being named head coach.

Rich was born in CIncinnati and is a graduate of Greenhills High School where he lettered four years each in football, basketball and baseball and one year in track. He is also a graduate of Miami University where he had a four-year track scholarship.

His teams won the Southwest Conference 14-times including two teams (1997 and 1989) which were undefeated during the regular season. He was named SWC Coach of the Year 13-times, Cleveland Coach of the Year four times, Northeast Coach of the Year twice and Ohio Division II Coach of the Year once (1989). He was also selected to coach the North team in the Ohio North-South Game in 1977 and in the Ohio-Michigan All-Star Game in 1989. His Bay team was regional runner-up in 1989. Voiers’ teams have also won three district championships, two district runner-ups honors and 12 sectional titles.

Voiers and his wife, Maureen, are the parents of three sons, Douglas, Richard and Gregory.