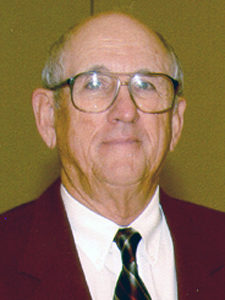 Dick graduated from Anderson University and earned his Master’s Degree from Ball State University. He served two years at Fort Jennings, thirteen at Ottoville and the last twenty-four years at Kalida High School as Head Coach. While coaching he spent seventeen years as a classroom teacher, twenty as a principal, and twenty-seven as an athletic director – many years serving in a dual capacity!

Dick is a dedicated family man. Married for 42 years, he and his wife Donna Mae have raised eight children. Their daughters and sons are: Debbie, Diane, Dana, Beth, Susan, Rick, Robert and Randy.

Coach Kortokrax was always quick to show appreciation and give thanks to those who helped him along the way as his role models, mentors, administrators and assistant coaches. Special mention goes to his coach, Louis Heckman, Paul Grilliot at Fort Jennings and to his assistant for thirty-six years, Joe Horstman. Included among the assistants were Jeremy Stouder, Jim McBride, Bob Gerdeman and his son Rick Kortokrax.

His accomplishments at Kalida include these championships: 15 Putnam League, 14 Sectional, 7 District, 3 Regional, 3 State Qualifiers, and State Champs in 1980-81. Coach of the Year Awards were: Putnam County League, District 8, Northwest Ohio and on the state level: Ohio High School Basketball Coach Association and Associated Press. He coached in the District 8 East-West All-Star Game and the North-South All-Star Games.