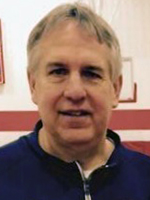 Steve is a 1979 graduate of Baldwin-Wallace College. He began his coaching career at his alma mater Buckeye Central, in Crawford County. After two years at BC, Steve moved down State Route 602 to accept the position as JV Coach at Colonel Crawford HS. He spent four years at CC before being named the Varsity Boys Basketball Coach at Ridgedale High School, in Marion County. Steve also spent eight years as Varsity Boys Basketball Coach at Lexington, and an additional year at Colonel Crawford, before landing at Norwalk, where he has been for the last 15 years. He is a retired social studies teacher who taught 31 years.

Steve’s record is 379-233. His teams have won 7 League Championships, 13 Sectional Championships, appeared in 5 District Championships, and advanced to the Regionals 3 times. In 2014 Steve led the Norwalk Truckers to a Division II State Championship. During his reign at Norwalk his teams won 57 straight regular season games, which is the 8th longest winning streak in the history of Ohio Boys Basketball. In 2011, Norwalk won their 1st NOL Championship in 49 years. Norwalk went on to win 4 straight NOL titles. Steve has been District Coach of the year six times and has been Northwest and Ohio Division II Coach of the year. He has had the honor of coaching in three All Star Games, the District 11 All Star Game, Ohio North-South All Star Game, and Ohio-Kentucky All Star Game. Additionally, Steve has had the privilege of coaching 10 All Ohio Basketball Players. Steve served as a District 6 Secretary, Treasurer and President.

In addition to his basketball coaching, Steve has also coached Volleyball, Track, Baseball, Football and Golf. In 2015 he became a member of the Buckeye Central Hall of Fame.