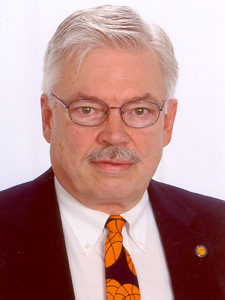 Tom then turned to coach girls basketball where he had two daughters that he wanted to coach. In 1982, Tom took over the Girls Basketball Program at Tippecanoe High School. In twenty-two season as the Head Girls Coach, tom has complied an overall record of 330-164. He has led the Lady Red Devils to two State Final Four Appearances, where he finished State Runner-ups in 1986. In over thirty years of head coaching experience, in boys and girls, Rettig has won over 373 games.

Coach Rettig has been very active in the OHSBCA. He has been District 9 Director for 19 years. He was on the National Federation of High School Coaches Association Board of Directors for five years and remains on the Advisory Board. Tom has coached in the OHSBCA North-South Classic, the Ohio-Michigan All-Star Game, the Ohio-West Virginia All-Star Game and the District 9 All-Star Game (9 times). In addition, he was the Associated Press Coach of the Year in 1991, the OHSBCA Coach of the Year in 2000, the recipient of the Arnzen Longevity Award, and the OHSAA Sportsmanship, Ethics and Integrity Award in 1998.