PAUL WALKER AWARD GOES TO ED ZINK
The Ohio High School Basketball Coaches Association is proud to announce that Ed Zink of Beavercreek High School is the recipient of the 2020 Paul Walker Award. The Paul Walker Award is presented annually by the OHSBCA to an active coaching member of the association who has made significant contributions to high school basketball. The award is named in honor of the late Paul Walker, the longtime coach of Middletown High School. At the time of his retirement, he had the most wins as a boys’ basketball coach in Ohio High School Basketball History. 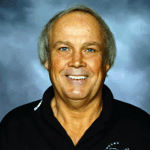 Ed was born and raised in Beavercreek, Ohio. While in high school he participated in football, basketball, and baseball. He graduated from Beavercreek in 1970 and was inducted into Beavercreek’s first “Hall of Fame” in 2000.

After graduating from high school, Coach Zink attended the University of Dayton on a football scholarship. His senior year he was named M.V.P. of the football team and was also named, “Flyer of the Year.” Ed graduated in 1974.

Ed has been married for 42 years to his lovely wife Nanci.

Rawlings has been the official tournament basketball of the OHSAA since 1999.

“The Rawlings basketballs were the clear favorite when we surveyed the coaches across Ohio,” said Kathleen Coughlin, Director of Sport Management for the OHSAA and the Association’s basketball administrator. “The coaches had several options and they chose the Rawlings basketball. It is a privilege to make this announcement alongside the OHSBCA and continue working with such a great company like Rawlings.”

“We have enjoyed and appreciated the collaboration with the OHSAA on this contract process,” said Tom Barrick, Executive Director of the OHSBCA. “This is a win-win for high school basketball in Ohio. Rawlings not only makes superior basketballs, but they are excited about being further invested in Ohio basketball. The vast majority of our coaches across Ohio voted in favor of the Rawlings basketballs and we are excited to continue this partnership into the future.”

Rawlings also makes the official softball and baseball of the OHSAA tournaments.

OHSBCA FORMS
The Ohio High School Basketball Coaches Association has posted its form on the new website (oh.nhsbca.org). The new website will allow the applicant to upload required documents and require photos.

We are in the process of converting all of the forms for our awards, nominations and applications to be housed in the new website. No more worry about mailing or emailing your nomination or application forms. You will be able to save the cost of a stamp or sending an email that gets lost in cyber space.

We thank you for joining our Coaches Association and encourage everyone to become an active participant in our organization. Hopefully, we will meet all your needs as a coach, and if there is anything that our Association can do for you, please contact your District Director. He is there to serve you.

Let’s continue to keep our membership strong. The OHSBCA is the third largest State Coaches Association in the USA!!! We want to regain the number 1 status and look forward to a better membership drive for the 2020-21 basketball season. WE WANT TO BREAK OUR RECORD AND HIT THE 4,200 MEMBERSHIP MARK!!!!!

Here is the breakdown of the number of coaches, by district, who joined the OHSBCA this year.

The Bob Arnzen Award is given to those basketball coaches who have devoted 20 consecutive years or more service to the same school and for their loyalty and commitment to Ohio High School basketball. The honorees will be presented their plaques during the games on Championship Saturday of their respective tournaments.

David Sheldon, President of the Ohio High School Basketball Coaches Association, proudly announces the coaches who have reached a milestone in career victories during the past season. The 100 and 200 winners received their award at their local district meetings in the Fall of 2019. The 300 and high winners will be recognized during halftime of one of their respective state finals basketball games in March of 2020 at the Schottenstein Center.

FUTURE ELECTIONS
In 2020, the following positions are to be elected:

For these ALL POSITIONS, the candidate must be a member of the OHSBCA. Election Procedures can be found on Page 17 of the January 2020 Constitutional Issue.

BOYS / GIRLS SENIOR PLAYER OF THE YEAR
Each year the OHSBCA selects a Player of the Year in each division of Boys Basketball. The 2019-20 season enters the 36th year the OHSBCA has been selecting the Player of the Year. The procedures for the selection of the Player of the Year is as follows:
1. Must be a Senior
2. Must be nominated by a state member
3. Must play in the North-South Game
4. Directors will vote on the Players
5. Nominees come from each State OHSBCA District
Boys and Girls Players in each division will be presented a plaque at their respective North-South All-Star Gam on Friday, April 24, 2020.

The winner of MR OHSBCA or MS OHSBCA honor will be presented a trophy at the respective North-South All-Star Game that will be held on Friday, April 24, 2020.

BOYS SHOWCASE
This year will mark the second OHSBCA D1 Recruiting Event presented by the Ohio High School Basketball Coaches Association in conjunction with the Ohio High School Athletic Association. The event will be held during the new NCAA Division I Recruiting Period in June. On Saturday, June 27, 2020 the top players from Ohio will assemble at Capital University in Columbus to participate in this day-long evaluation event.

GIRLS SHOWCASE
After lengthy discussions with showcase personnel and receiving feedback from girls district directors and the executive board, the Girls Showcase will be suspended for this year, 2020. We will not be taking nominations for the girls showcase this year.

We will revisit the showcase next year with hopes that the NCAA will rearrange their recruiting calendar to better support scholastic events as they did with the boys calendar.

We are always open to suggestions and ideas on how we can reinvent the Girls Showcase to make it a positive event in the future.

The winning coach in each division will be presented a plaque at their respective North-South All-Star Game on Friday, April 24, 2020.

Local winners will receive a plaque at the District’s Local Meeting. The State Winners will be presented their plaques at the their respective North-South Game - Boys at Olentangy Liberty High School and Girls at Denison University on Friday, April 24, 2020.

SCHOLARSHIP SOCIETY
The OHSBCA has established the Scholarship Society to recognize Student Athletes for scholastic excellence. The Gold and Silver Certificates will be award to Seniors and Juniors who meet the criteria for the award. We want to give recognition to all Junior and Seniors who display high marks in academics, citizenship, and sportsmanship. All Juniors must have a 3.2 Grade Point Average for Five Semesters and Seniors must have a 3.2 Grade Point Average for Seven Semesters.

These athletes will able to list this honor on College Entrance papers, year books, job applications, etc. This is a significant award as it comes from the Basketball Coaches of the State of Ohio. The recipients receive a Silver Certificate if they are a Junior and Gold Certificate if they are a Senior. Their names will be listed in the Spring Edition of the Hooplines.

ACADEMIC TEAM
The 2019-20 basketball season will be the 17th year consecutive year that the Ohio High School Basketball Coaches Association will recognize basketball teams for their excellence in the classroom. Again this season the OHSBCA will be honoring the top 5 girls teams and top 5 boys teams who report the highest team GPA. In a continuous effort to reward the student-athletes for their efforts in the classroom, the OHSBCA will honor the entire team for their academic excellence.

Academic Team Award Winners
Criteria:
1. Complete the nomination form using the GPA’s of the top nine varsity letterman.
2. All GPA’s must be converted to a 4.00 grading scale. (If your school will not convert to a 4.0 GPA, you are ineligible for the award.)
3. All GPA’s must be carried out to two decimal places (eg. 3.95)
4. GPA’s are only for the First Semester of the 2019-20 school year. (Not cumulative GPA’s.)
Award:
1. The OHSBCA in conjunction with the Ohio Army National Guard will provide a plaque that can be displayed at the school to commemorate the team’s academic success.
2. Winners will receive $100 pizza party compliments of the Ohio Army National Guard.
3. Winners will receive recognition in May Issue of Hooplines. (OHSBCA Newsletter)
Special Instructions:
The Ohio Army National Guard will present a plaque to the winner at a mutually agreed time.

Winning team is required to take a picture at their pizza party and send to the Academic Chairman, Adam Hall. Teams failing to turn in pictures will not be recognized in the May issue of Hooplines.

ACADEMIC ALL-OHIO
Each year a committee of the OHSBCA selects its “Academic All Ohio Team” for the school year. Ten Boys and ten Girls are selected for each of the four divisions. 2019-20 will mark the twenty-seventh year that the association has chosen “All Ohio Academic Teams.”

The players are selected for this honor based on their academic excellence and their athletic contributions to their basketball teams.

COACHES SCHOLARSHIP
The OHSBCA Awards Fifteen $1,000 Scholarships each summer to the sons and daughters of active members of the Ohio High School Basketball Coaches Association. One of the parents of the applicant must have been an active coach in the OHSBCA for the last five consecutive years.

Each recipient will receive a plaque courtesy of the Ohio Army National Guard and a check for $1,000 at the North-South Game on Friday, April 24, 2020.

INDIVIDUAL TOP 20 RULES:
Free Throws - Players must have attempted at least 60 Free Throws during the regular 22 game season. Top 20 in Shooting Percentage will be honored.

Three Point Field Goal Shooting - Players must have attempted at least 60 Three Point Shots during the regular 22 game season. Top 20 in Shooting Percentage will be honored.